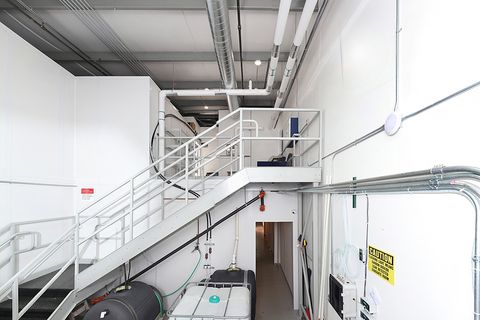 FFU and AHU for cleanroom

Air handling unit (AHU) is a device that controls the temperature, humidity, and regulates pressure in controlled environments. As a part of the HVAC system, it is a high capacity air handling unit, facilitating airflow of cleanrooms. AHU is made of 304 stainless steel, with a filter system, back-blowing fan, and cooling unit, helping let fresh air into cleanroom.

Each cleanroom requires a powerful air handling system for the manufacture of pharmaceuticals, medical devices, semiconductors, and healthcare products. The floor in the cleanroom is not redundant and the HVAC system of cleanroom must share the area with other air systems.

3. Position and configuration of air filters in cleanroom

Installing a primary filter before the HEPA filter in HVAC system of cleanroom could maintain the longevity of the system. The pre-filter helps extend the life of the HEPA filter by removing particles larger than 1 micron. AHU rotors blow air with actuators. The fan controller is either integrated into the automatic control system (Crow Filter Control System) or sometimes functions via manual control panels. The software system and automatic timer allow lower airflow during times when cleanrooms are not in use or operate at a minimum level. Power sensor allows reducing power consumption in the absence of people.

In general, a prolonged shutdown of cleanroom air systems reduces the life of the filter due to “filter overload”. If the air conditioning system is completely disconnected, particles will stick and remain in the filter. When the system restarts, air pressure will affect the particles in the filter. As a result, microscopic cracks appear, leading to leakage, reduced efficiency, and reduced filter life.

The Fan Filter Unit (FFU), is a cleanroom air purification solution with several advantages over traditional air handling systems. They are applicable in both small and large spaces with a low cleanliness rating such as ISO Class 3. The airflow rate and the cleanliness requirements decide the number of FFUs needed. An ISO Class 8 cleanroom ceiling requires only 5-15% ceiling coverage while an ISO Class 3 or higher cleanroom may require 60-100% coverage.

Each FFU filter is customizable in terms of filter size, airflow rate, and other filter options. This allows further adjustment of the cleanroom space based on budget and process sensitivity. Cleanrooms having the most stringent procedures can combine FFUs with ULPA filters. A higher airflow rate not only improves particulate filtration but also increases procurement and maintenance costs. FFUs with fewer functions and filters (e.g. using HEPA filters) can be utilized in places where there are fewer important activities.

These systems are very flexible and can easily replace filters when needed. Expanding cleanrooms or increasing airflow rates do not require the HVAC contractor to run additional ducts or make significant changes to the existing HVAC system. Installation can generally be handled by small teams without the need for a forklift.

Each FFU can be replaced as needed. Unlike other air conditioning units such as AHU, filter maintenance in an FFU does not require the entire system to be shut down. Maintenance-replacement parts in FFU can be switched off independently, while other equipment functions to maintain the cleanliness of room (the cleanliness level will decrease slightly due to lack of a device). FFUs are not only easy to maintain but also produce much lower noise during operation.

These self-contained filters are equipped with HEPA that is 99.99% efficient or ULPA 99.995% efficient for many applications.