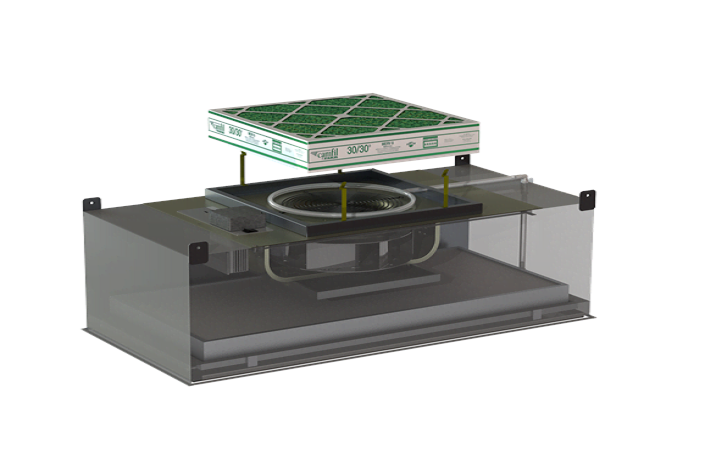 The Fan Filter Unit FFU functions almost like a conventional HEPA air outlet, both the air supply head in the cleanroom. So what is the advantage of FFU?

First of all, let’s find out what is FFU, FFU stands for FAN FILTER UNIT. That means combining a fan and filter to form a filter terminal that can operate independently.

2. History of the FFU

As early as the 1960s, scientists at the Sandia National Laboratory in San Francisco, USA, have successfully developed a stratospheric flow technology using HEPA filters. Thereafter, commercial fan filter units were widely used in a number of operating rooms and industrial plants in the United States.

However, it was not until 1984 that FFU was adopted on a large scale in Asia (about 5,000 units). So what is the reason why it has not been widely developed for such a long time, there are 3 dominant issues as follows:

FFU has 6 unique advantages, mainly include the following:

Because fan filter unit is a self-sufficient air unit, it is not limited by area. In a clean room with a large area, will control in different areas depending on needs. Furthermore, when the semiconductor manufacturing process changes, the plant’s layout must be adjusted accordingly. FFU’s flexibility makes adjustments easy and requires no second investment.

In theory, this equipment that has not been used for a while can be taken down, sealed, and retained for later use.

This is a unique feature of fan filter unit. Because it can provide static pressure by itself, the canister supplies the same air as a cleanroom. In this way, the dust particles in the static pressure box are not subjected to pressure and do not leak into the outside environment, making sealing simple and safe.

The use of fan filter unit saves the production and installation of ducts, as the duct takes up a lot of installation time in a cleanroom building. Regardless of the investor’s desire to invest in high returns, choosing to use this equipment will help make that happen.

In spite of the FFU selection force, the initial investment is higher than using duct for ventilation, during later operation, it has the outstanding advantage of saving energy and needing no maintenance. maintenance.

Compared with the RCU HEPA system, the FFU DCC MAU system takes up less height in the supply static box and basically takes up no space in the cleanroom. The RCU system is hung from the ceiling or installed in a clean room, it takes up a lot of space.